8 Things I Learned When I Gave Up Alcochol for Lent

This seems late but the truth is, I abstained from alcohol beyond Lent for a total of 60 days. I just broke the booze-less streak on Sunday, April 10 to celebrate half marathon #4.

Hubby thinks I drink too much. He could be right, but then he doesn't drink.

Without any occasion, I can chug a 750ml bottle of wine or six 12-oz cans of beer in 1 meal. Winter makes me booze more, but running keeps me off it (mostly). I'm not an alcoholic. I just enjoy drinking.

I wanted to practice many things including self control. So after our 2016 superbowl party, I decided to stop drinking for an undetermined period of time. I started on Wednesday, not realizing that it was Ash Wednesday until 2 days later. Then I thought, why not give up alcohol for Lent? Forty days seemed easy. Well, here's what I found out...

1.  Whoever said that there are 40 days of Lent cannot count.

I grew up Catholic and I never bothered to question this popular belief.
There's actually 46 days including all Sundays between Ash Wednesday and Easter. I only found out because after 4 weeks into my promise, I counted the number of days to Easter. I was disappointed that it was still 18 days away.

2.  Cheese IS better with wine as potato chips with beer.

Especially the blue variety. Yes, there are blue potato chips and blue beer too.

3.  It's more fun to play billiards with booze, but I play better without it.

I've never beaten the hubby before but I did during my 60-day dry spell.

4.  My appetite shoots up when impaired. I also love to munch while boozing.

So I lost 5 pounds  with my 'regular' appetite, and active life without truly restricting my food intake.

5.  My blog posts seemed more engaging (and got more likes on Facebook)

Maybe because I was thinking more clearly? 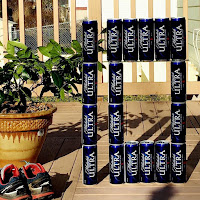 My default beer costs about $25 for a case of 30 cans (including tax),

Microbrews are more pricey - at least $1.50 per bottle/can.

7,  It's easier to stick to a commitment when:

With work and no race plans, I tend to be glued to my seat, This could mean I'm inactive for 3-4 days at a time. It was tough to run again after a short break because I felt heavy, and tire faster.

About 10 days of being off alcohol, I felt the difference. I could breathe better and felt lighter. It took less time to warm up, and 3 miles didn't feel overly exhausting.

I still abstain from alcohol for as long as I can when I'm aiming to perform in a race. My next important race is a 25K trail in May 2016. I'll most likely stop drinking at least 2 weeks before that day.

If you were to give up something to practice self control, what would it be?